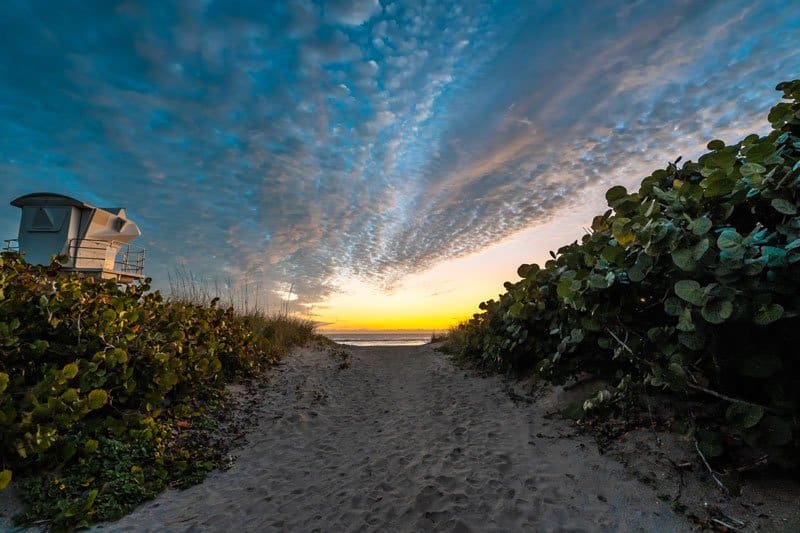 When it comes to enjoying as much of Florida as possible – taking as big a bite from the orange as you can, in effect – it’s hard to beat a classic fly-drive option, and this is something the Sunshine State offers in abundance.

Many of them will be fairly obvious. Orlando and the Gulf Coast spring to mind as an ideal combination, as does Miami and the Florida Keys (which we featured in this recent blog).

But, when you want to travel the road less travelled, and take in some of the more offbeat destinations, we think a journey that takes in the Treasure Coast should be high on your Wish List for a genuine Floridian adventure.

Where Is Florida’s Treasure Coast?

First of all, we need to define the area in question, as many visitors will not be familiar with this stretch of the state’s Atlantic shoreline, but which is aptly and imaginatively named for an essential aspect of local history.

Immediately to the north is the all-action Space Coast, home of the Kennedy Space Center, Port Canaveral, Cocoa Beach and Melbourne, while to the south is the glittering Gold Coast that features Palm Beach, Boca Raton and Fort Lauderdale.

In between, the 90 miles of ocean-washed coast – covering each of Indian River, St Lucie and Martin counties – is a lesser-known, ahem, treasure trove of delightful beaches, impressive resorts and wildlife opportunities, highlighted by the natural wonder of Sebastian Inlet State Park.

Why Is It Called the Treasure Coast?

Good question. This is not the most obvious part of Florida, but its heritage is both well named and well deserved. Genuine aficionados of the Sunshine State will know it was founded by Spanish Conquistadores in the 16th century, and it was also squabbled over by the British and French until it became part of America in 1821.

That European colonial history gave rise to a lot of sea-going traffic up and down the maritime south-east for more than 300 years and, consequently, a lot of shipwrecks. The combination of hazardous currents with periodic storms throughout the region meant that the coast hereabouts could be a treacherous area to navigate.

Most famously, a Spanish treasure fleet in 1715 ran into a mighty hurricane here, with 11 of the 12 ships going down with terrible loss of life, along with a priceless cargo of silver and gold. The fate of that precious haul remained unknown until 20th century treasure hunters got on the trail and salvaged much of the lost loot, and that has continued to the present day, with boats continuing to make regular trips out to the dive sites. Hence, a whole coast was renamed.

What’s In The Treasure Coast?

While the state’s Atlantic aspect features some of the biggest and most historic cities in the likes of Jacksonville, St Augustine, Daytona Beach, Palm Beach, Fort Lauderdale and Miami, things take on a distinctly more subdued and low-key characteristic in this particular region.

Here you can kick back with the same kind of blissful beach attributes that you’ll find immediately to the north and south, but with far fewer of the crowds, a more low-rise building style, and plenty of raw, unspoiled nature. Considering it is just 100 miles from both Miami and Orlando, it is light years away from the hustle-bustle of those high-profile destinations.

What Are The Main Attractions of the Treasure Coast?

Just because there are no theme parks, dinner shows and lively nightclubs doesn’t mean this region has no attractions to speak of. Far from it. But this is definitely a more natural and nature-orientated destination, somewhere you can really feel the vast elbow-room the state has to offer.

Sebastian Inlet State Park is the big draw, a 1,000-acre open-air playground that appeals to the active and indolent alike for its array of activities but also unspoiled stretches of wonderful beachfront. Sebastian Inlet itself is a magnet for water-sports enthusiasts of every kind, and the fishing here is world class, especially for snook, redfish and mackerel, while you can also learn more about the region’s heritage at the McLarty Treasure Museum and the Sebastian Fishing Museum.

The Environmental Learning Center at Vero Beach is a great place to take the kids, as are the Smithsonian Marine Station at Fort Pierce and Florida Oceanographic Coastal Center at Stuart. More essential area history and background can be found at the House of Refuge Museum (Stuart) and Mel Fisher’s Treasures (Sebastian).

Getting back to natural Florida is the essence of the excellent Kiplinger Nature Preserve, with its many hiking trails, and Hobe Sound Nature Center, as well as the unique Nature Conservancy Blowing Rocks, a peaceful barrier island sanctuary with unusual limestone rock formations.

Head inland and there is even more to discover at the former Seminole trading post of Indiantown, where the Seminole Inn is on the National Register of Historic Places, and is the gateway to several more nature discoveries, including the Barley Barber Swamp.

And, while Port St Lucie may be the area’s biggest city, little Stuart, on the St Lucie River, is arguably its most attractive, with a small-scale, old-world charm that derives from its scenic Riverwalk and a historic downtown area packed with small shops, cafes and restaurants. There is also a busy marina that helps to underline the city’s nickname of The Sailfish Capital of the World for its many fishing charters.

Where Are The Best Restaurants of the Treasure Coast?

If much of the region is predicated on its coastal situation, it stands to reason this should be a good place to come for great seafood, and the Treasure Coast does not disappoint in that expectation. In fact, this is secretly a minor foodie destination in its own right, with a farm-to-table and even boat-to-table aspect that means the food on your plate is often as fresh as it comes.

Waterfront dining is also a notable feature here, and it’s hard to go wrong for an eye-catching location anywhere along the full 90-mile extent, especially in Vero Beach and Jensen Beach.

Be sure to seek out Cobalt at the Kimpton Vero Beach Hotel (for the food and great cocktails!), as well as the rustic charm of nearby Waldo’s at the Driftwood Inn. Chuck’s Seafood Restaurant is a locals’ favourite in Fort Pierce, as is Harbor Cove Bar & Grill, while each of 11 Maple Street, Pietro’s On The River and Peter’s Steak House earn high marks in Jensen Beach.

Mulligan’s Beach House Bar & Grill is definitely something of a local institution for a fun and lively lunch or dinner as it has outlets in each of Vero Beach, Sebastian, Jensen Beach and Stuart. But, when it comes to the most overwhelming choice for sheer numbers, you should head for Stuart and its pretty downtown area.

This is where you’ll find some 30 restaurants and cafes of all shapes and sizes, from the ritzy, small-scale Italian bistro style of Eighteen Seminole Street to Stuart Boathouse, with its expansive waterfront terrace, and just about everything in between. Try the new-American cuisine of The Gafford for a special occasion, Osceola Street Café for anytime dining enjoyment, or, at sunset, the Sailor’s Return at Sunset Bay Marina, for the perfect combination of memorable local seafood and a wonderful view.

Where Should We Stay on the Treasure Coast?

If you’re flying into Orlando, make Vero Beach your first stop and be sure to spend a few days at the gorgeous Costa d’Este Beach Resort, owned by Gloria and Emilio Estefan, where the magnificent beach is only the start of an elegant seaside adventure that includes a superb Spa, signature restaurant and cabana-style pool bar.

Continue down the coast to Jensen Beach and look for either the boutique B&B style of the seven-room Jensen Beach Inn, with its highly-rated Pineapple Jack’s Bistro, or the sheer ocean splendour of the Marriott Hutchinson Island Beach Resort, with glorious views all round and the benefit of the Ocean Club Golf Course.

If you’d like to take advantage of all the charms of Stuart, consider either the chic B&B of the Inn Shepard’s Park or the historic Old Colorado Inn, with a mix of hotel and guest lodge accommodations.

Want to finish your fly-drive trip in style? Continue south to Palm Beach and check into the swanky Brazilian Court Hotel, with its celebrity chic, or take the family to the all-action – and historic – The Breakers, one of the great Flagler era hotels that retains its early 20th century style.

Finally, you can complete the drive by heading south to Miami for the flight home, or return to Orlando (a slightly longer drive) and take in a theme park or two!