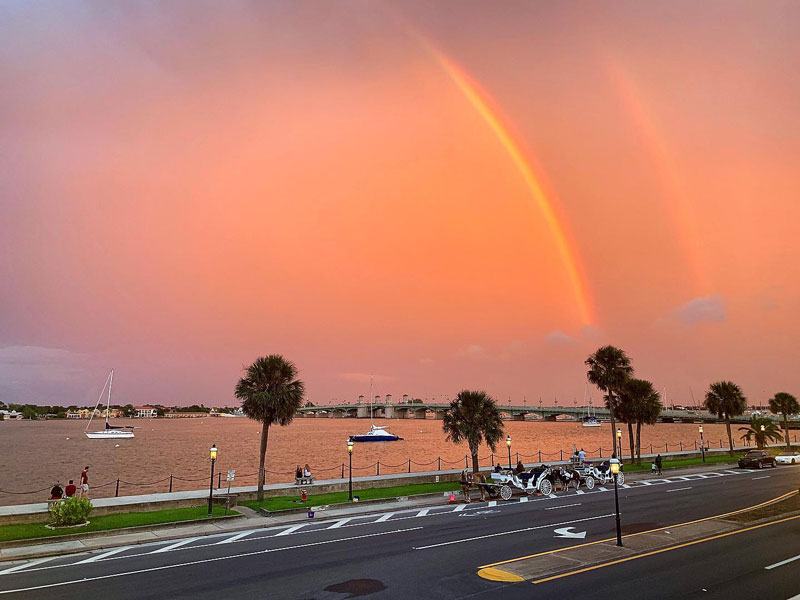 When you hear someone talk about the All-American Road, you probably think immediately of Route 66, the Mother Road, from Chicago to Los Angeles, and a truly iconic section of highway.

Well, that’s certainly not the only All-American Road game in town these days and, as of February this year, Florida now has TWO of its own, and the latest is almost certainly somewhere you’ve never heard of.

Going back to 2009, the Sunshine State was seriously lagging behind in this ultimate designation for significant driving routes through America, but then the grand Overseas Highway (US Highway 1) through the Florida Keys was finally given the accolade, like several additional sections of Route 66.

But now comes a whole new driving experience and, like its Keys cousin, the A1A Scenic & Historic Coastal Byway is the perfect example of a superb Florida fly-drive and, having just spent an extended road trip getting to know it better, we can certainly recommend it as an exceptional experience for our international visitors.

Just to start with, the Scenic Byway is officially designated for just a 72-mile stretch of route A1A along the Atlantic Coast, from Ponte Vedra Beach to Flagler Beach, so it’s not the longest drive in the world, or even in the state.

For a stay in the Ponte Vedra Beach area, we have no hesitation in advocating the Sawgrass Marriott Golf Resort & Spa as an idyllic place to spend a few days of seaside splendour, with its pristine private beach and world-class golf facilities.

But it packs a huge amount into its relatively modest length, and it’s a journey in terms of time as much as anything else. Because this is where you pass into Old Florida, the land PD, or Pre-Disney, the period when low-rise motels and one-off, family-owned boutiques were as fancy as things got.

It’s a narrow strip of barrier-island coast separated from the mainland by the intracoastal waterway formed by various rivers and canals, and it incorporates America’s oldest city as well as some of the state’s most wonderful natural playgrounds, including Guana Tolomato Matanzas National Estuarine Research Reserve (GTM Reserve for short).

It is largely just a beguiling drive surrounded by eye-catching coastal scenery, though, especially around the Matanzas Inlet, and along the wide, open beaches that fringe virtually the entire route. This is not mass-market territory, and it’s all the better for that.

The fact that it finally gained national recognition for its scenic nature is a tribute to the efforts and persistence of the Friends of A1A, a local group dedicated to preserving and enhancing the rich historical and cultural resources of this fascinating travel corridor.

Ever since the road was recognised as a National Scenic Byway in 2002, they have been promoting its many charms and attractions with a view to eventually reaching the coveted All-American status, and that has finally paid off.

As of February, A1A joined another 14 significant routes offering a truly memorable driving experience, and you can now soak up that extra vibe of somewhere special that comes with the new designation.

Historic St Augustine is the obvious place to base yourself to explore this full stretch of scenic A1A, which runs for almost 30 miles to the north of the city and 43 miles to the south. It is part of America’s ‘First Coast’ and is packed with heritage and one-off attractions.

As for what makes that “something special,” here is the official explanation of the merits needed to qualify as an All-American Road:

“A road must possess multiple intrinsic qualities that are nationally significant and have one-of-a-kind features that do not exist elsewhere. The road or highway must also be considered a ‘destination unto itself.’ That is, the road must provide an exceptional travelling experience so recognised by travelers that they would make a drive along the highway a primary reason for their trip.”

All of those things A1A does magnificently. It traverses a section of coast that is packed with ecological diversity, that has both cultural and historical significance, and features unique elements that are a reason for visiting in the first place.

The man-made elements of this route are fairly obvious and cover the full 508-year history of European discovery and exploration of the state itself, dating back to the arrival of the Spanish conquistadores in 1513.

The city of St Augustine is at the heart of it, America’s oldest city (founded in 1565) and still full of period charm and allure, from the massive bulk of Castillo de San Marcos – the largest masonry fort in America – to the distinctive Mediterranean cuisines that those early immigrants brought and are still in evidence today.

Don’t miss historic sites like Fort Matanzas, Flagler College (the original Ponce De Leon Hotel of the Henry Flagler era in 1888), the Lightner Museum, the Fountain of Youth Archaeological Park, St Augustine Lighthouse and Maritime Museum, and the whole length of St George Street, which harks back to its British colonial rule days.

For a historic place to stay in a historic city, St Augustine’s Casa Monica Resort & Spa harks back to the gracious days of Henry Flagler and his upscale East Coast Railroad that helped to create Florida’s tourism profile. The hotel dates back to 1888 and is fully restored to its period hey-day.

Flagler Beach is practically at the opposite end of the historic spectrum, a small-scale exercise in 1950s timewarp charisma and enchantment. This is the epicentre of Old Florida, where the attractions are relatively simple but totally genuine and appealing, whether its just enjoying the miles of wide open beach, strolling for shells, fishing off the pier or trying a little surfing.

All the shops, restaurants and cafes are true originals, from the likes of the Flagler Surf Art & Stuff boutique to High Tides at Snack Jack, one of many bars and diners dotted along the seafront that provide blissful opportunities to while away an hour or three while enjoying the magnificent coastal eye candy.

But that is only half the story of A1A, as it also offers a chance to get deep into the natural side of the Sunshine State, with a series of parks, recreation areas and wildlife preserves that truly invite the visitor to slow down and savour the unspoiled, untrammeled and unexpurgated countryside that is an intrinsic part of the holiday experience hereabouts.

The geological mixture of rivers, marshes and Atlantic seafront has combined to create a series of rare ecosystems that harbour hundreds of species of plants, birds and animals, many of which are common only to this region.

The area immediately north of St Augustine is positively packed with this wildlife jamboree, while to the south you’ll still find it aplenty in places like Washington Oaks State Park, Bing’s Landing, Anastasia State Park and River to Sea Preserve.

If you prefer a more beachfront style for your stay on this stretch of the coast close to St Augustine, Beacher’s Lodge Oceanfront Suites offer a great self-catering alternative right on Crescent Beach, with its own boardwalk providing direct access to the golden sands.

This is also the place to discover the world’s first Oceanarium, Marineland, which opened to the public in 1938 and continues to display its extensive work in maritime ecology and research. It was built as an underwater studio for filming marine life, and helped Hollywood out with films like Creature From The Black Lagoon, Secrets of the Reef and Bernie The Dolphin.

Today it is one of the coast’s most-visited attractions for a close-up experience with its dolphins, turtles and tortoises, including the chance to enjoy several interactive programmes, swim with the dolphins or take a boat or kayak tour of the surrounding waterways.

Perhaps the ultimate nature experience, though, belongs to the GTM Reserve, a massive 75,000-acre slice of wild Florida that runs the gamut of beach dunes, rivers, marshes and pine woods, and is a genuine wonder of natural biodiversity.

This is the place to come for a hiking or kayaking tour, as well as to enjoy miles of walking and cycle trails, with the chance of spotting a terrific variety of wildlife, from hundreds of species of birds to the typical Floridian denizens of alligators, sea turtles and gopher tortoises. Turtles especially nest in the dunes here, and the Reserve’s visitor centre provides plenty of background and educational programmes into the environmental challenges facing several endangered species.

So, whatever you might be interested in from the state’s vast panoply of attractions and highlights, you can be sure you’ll encounter a good number of them along this exceptional highway.

For the full lowdown on this expansive 72-mile journey in Florida’s many timeless fascinations, be sure to look up the Scenic Byway website, www.scenea1a.org, and also download the special interactive App that provides a handy map and points out all the highlights as you travel along its length, available free at www.travelstorys.com/tours/90/A1A%20Scenic%20Byway

We’re going to leave the final word, though, to Byway administrator Danielle Anderson, who lives in Flagler Beach, and gave us her thoughts on the special recognition of their unique route. She said:

“The Friends of A1A are thrilled to see our incredible Byway finally take its place as an All-American Road. For more than two decades, volunteers have worked tirelessly to preserve, protect, promote and enhance this 72-mile stretch along Florida’s east coast that dates back to the nation’s earliest days. It is truly an honour for us to be able to share our passion for our byway communities along the A1A Scenic & Historic Coastal Byway with travellers from across the world, and we hope you will fall in love with our piece of Old Florida, too.”