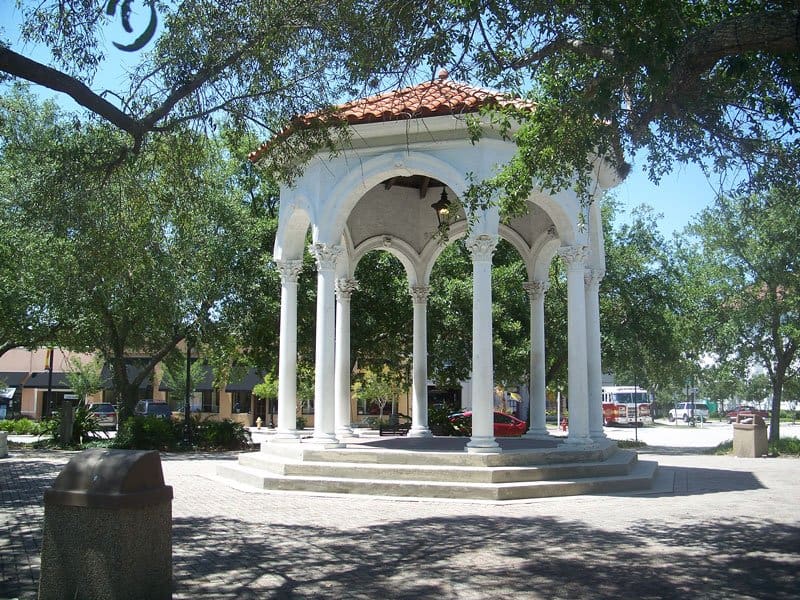 For every big-city location in Florida there is a ‘hidden gem,’ an area that is an attraction in its own right, worth seeking out for an essential part of that city’s experience. This series introduces these delightful – and often historic – sections of the Sunshine State.

The city of South Jacksonville ceased to exist in 1932. Not because of anything disastrous, you understand, just because the city of Jacksonville itself got too big for its boots; or, at least, its borders.

As it became incorporated into the larger metropolis, the South city became a whole new district, and thus San Marco was born, a historic gem within the larger picture of one of Florida’s most dynamic modern cities.

Today, San Marco represents the charm and appeal of Jacksonville’s yesteryear, an upscale neighbourhood of distinction and character – but none of the snobbishness you might expect – with an iconic tree-lined central ‘square’ that acts as the focal point for this sprawling area south of the St John’s River.

This is the place to come for a great breakfast or a special dinner, for casual shopping or just a wander along some surprisingly graceful streets, many of which date back to the suburb’s 1920s hey-day (before the Big City muscled in).

Originally accessible from across the river only by ferry, the two parts of Jacksonville were forever linked by the opening in July, 1921, of the Acosta Bridge, which provided both automobile and pedestrian access, and paved the way for meteoric growth. 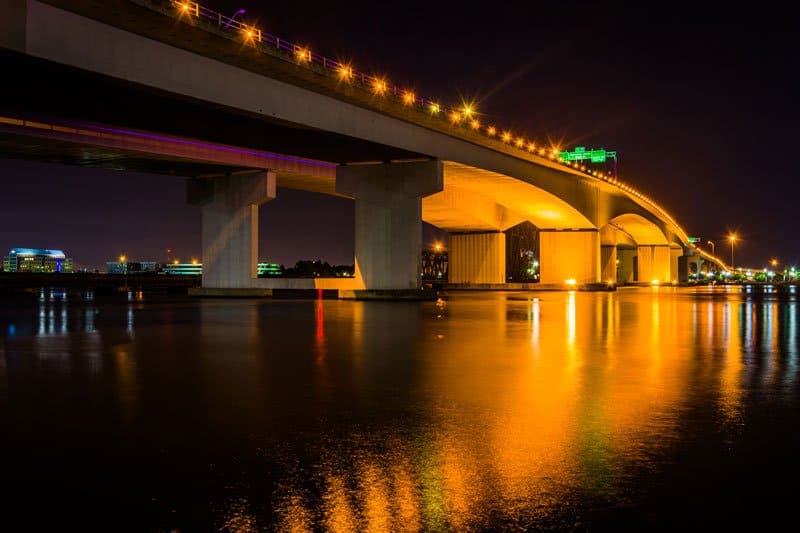 From a population of barely 600 in 1907, South Jacksonville mushroomed to 30,000 by 1930 and its future was assured. The original San Marco – named for Venice’s famous Piazza – was actually a planned 1926 development in Italian Renaissance revival style, with its own commercial district (today’s ‘square’, which is actually triangular in shape), but the architecture soon devolved into a mish-mash of contemporary designs. However, its success as a neighbourhood still ensured that it provided the overall name for the city’s 1932 ‘takeover’.

Jacksonville wasn’t immune to the urban blight that hit many cities in the 1970s, with its core suffering the typical large-scale abandonment and decay of the period. San Marco was also headed down the same sorry path until the San Marco Preservation Society was formed to protect and revitalise the district in 1975.

The fact the Society was hugely successful can be seen in the modern face of this delightful area, notably around the Square, with its rebuilt lion fountain and pedestrianised green space of Balis Park. The three main roads that converge on the Square were re-configured in 2013, making the area’s epi-centre even more attractive and pedestrian-friendly.

The historic theatre has been revived, and some of Jacksonville’s best restaurants have made this their heartland, ensuring a go-to destination packed with the latest culinary treats and trends, including several tempting craft breweries.

If that is the big-picture view of Jacksonville’s classiest suburb, the detail is even more compelling, as there is enough to keep architecture buffs, shoppers and gourmets all thoroughly entertained for a day or two of relaxed rambling.

Eye-catching signature buildings include the 1938 San Marco Theatre, an art deco single-screen cinema that still shows the latest Hollywood blockbusters, and, from the same year, the Little Theatre, one of the oldest community theatres in the country and also on the National Register of Historic Places. 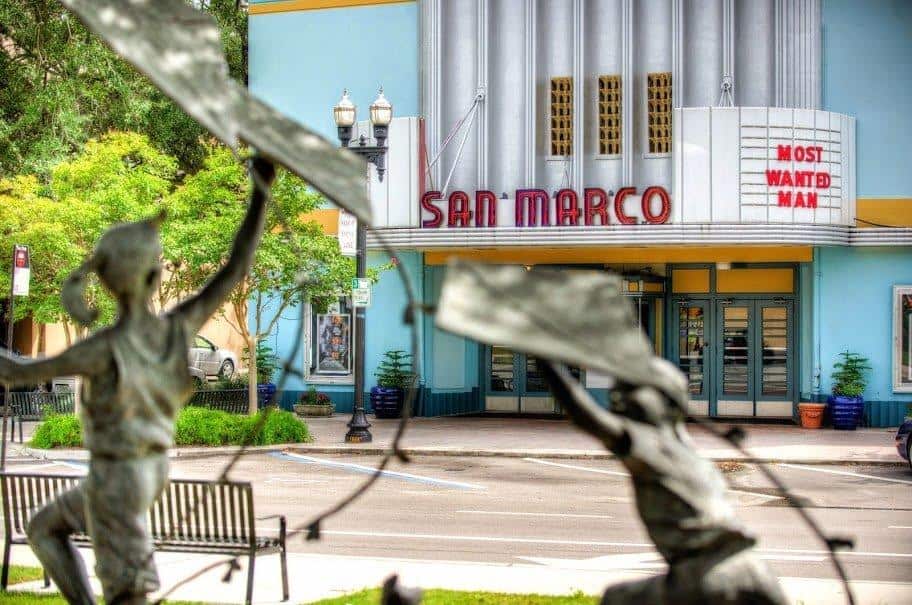 There are no fewer than 14 parks across the district, including the pleasant, walkable aspect of Riverfront Park, with superb vistas across the St John’s to downtown Jacksonville, notably with views of the wonderful Cummer Museum of Art and Gardens.

The Southbank Riverwalk is must-see territory for visitors as it provides a glorious one-and-a-quarter-mile stroll along the river that provides a full panorama of the northern half of the city. It also features Friendship Park with its huge, colourful fountain, and the Museum of Science and History, boasting three floors of permanent displays and travelling exhibits.

Most of the one-off boutiques and shops are clustered around Balis Park, either side of the Square, including the area’s most-visited location, the San Marco Bookstore, a 48-year-old family-owned business and local institution that specialises in rare and collectible books, as well as the latest best-sellers.

Other notable shops include Heydey toy store, Beau Outfitters, Rosie True (women’s clothing) and The Snob consignment shop. And you shouldn’t miss the tempting treats on offer at Peterbrooke Chocolatier, with a mouthwatering array of confectionery, much of it made in-house, including a variety of chocolate-dipped delicacies.

Those looking for something special in the jewellery stakes should head for the 25th floor of the Riverplace Tower on the Riverwalk, where Harby Jewelers is a Jacksonville original, offering new and estate pieces along with stunning river views.

And, when you want to take home a ‘taste’ of San Marco, there are two ideal opportunities thanks to the River City Brewing Company (right on the Southbank Riverwalk) and Aardwolf Brewing, both with a terrific array of craft beers, and part of Jacksonville’s booming brewery scene, which numbers 14, and counting! 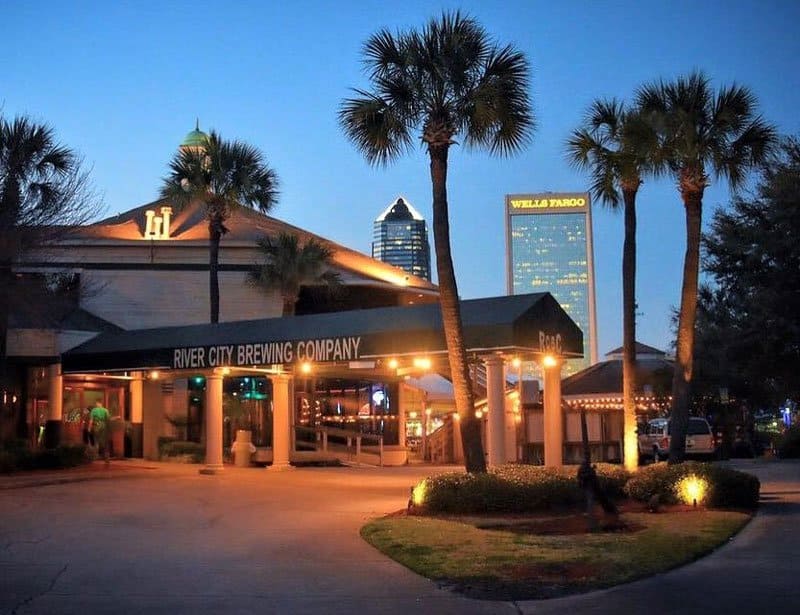 While there are plenty of activities and sights to keep you busy, San Marco really comes into its own as a place to go for a memorable meal. The restaurant choice is dazzling, and features a rich variety, from down-home dining to gourmet fare, and just about everything in between.

You should definitely be here in time for breakfast, as the district offers two superbly contrasting choices for the first meal of the day. Try the Maple Street Biscuit Co. for a terrific array of home-made American buttermilk biscuits (try The Farmer – a flaky biscuit with fried chicken, smoked bacon and the house apple-butter), plus some tempting side dishes, or Metro Diner, a truly classic American all-day diner that serves up some of the biggest breakfast platters you’ve seen!

For lunch, there is an even better array of choice, starting with The Bearded Pig, rated as one of the best barbecue joints in Florida. European Street Café offers a fine German-inspired menu (look out for the desserts!), while Bistro AIX goes for a French accent but still plenty of style. Despite the Greek name, Taverna is a hip wine bar with an Italian-Spanish menu that varies delightfully throughout the day. 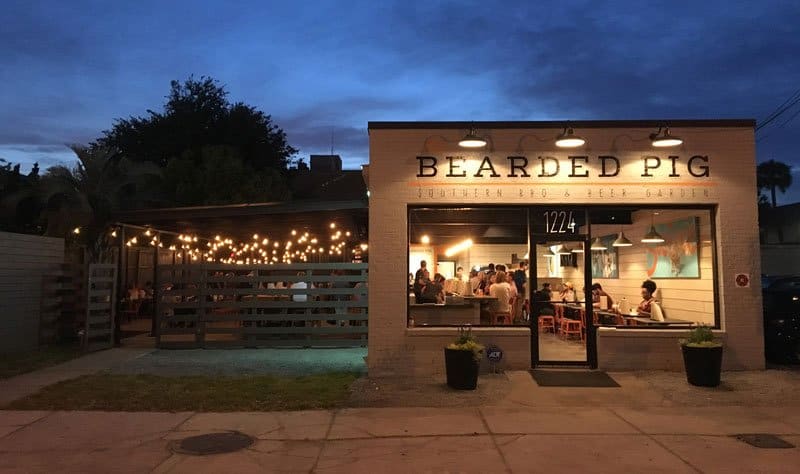 When it comes to dinner, San Marco is definitely the place to be, as there is an increasingly sophisticated edge to many of the evening offerings. BB’s Restaurant & Bar is a buzzing bistro serving innovative New American cuisine, plus a series of desserts that are absolutely to die for. Rue St Marc features contemporary French fare with flair, and Town Hall Restaurant is a “community gathering spot” that goes for the full farm-to-table style, plus some wonderfully creative cocktails.

Finally, Matthew’s is the place for a special occasion, a beautifully refined setting with artfully created classic French and Mediterranean dishes, topped by impeccable service, that set the seal on any visit to San Marco.

All in all, we think this is a genuinely surprising destination that has charm aplenty – and great food in abundance!