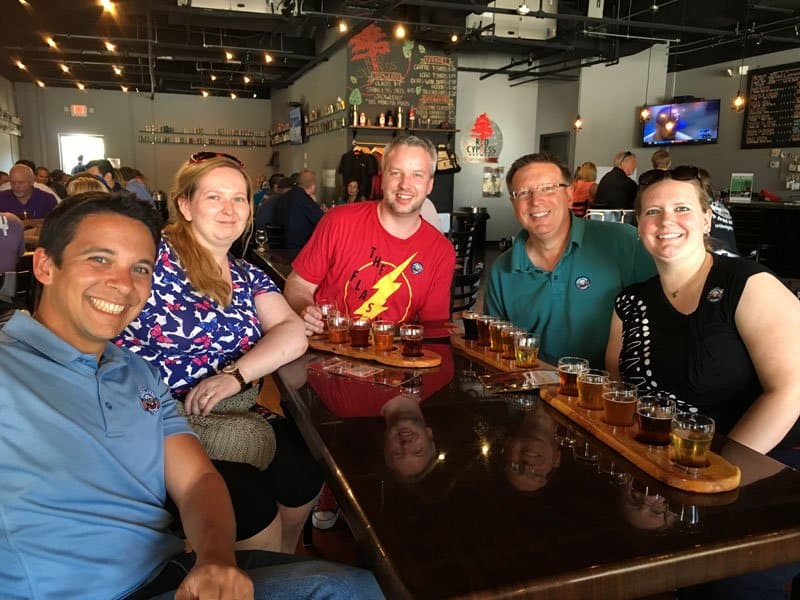 This is a Public Service Announcement – just because you’re coming to America doesn’t mean you have to drink Budweiser, Bud Light or Miller Lite. Seriously, just don’t.

Yes, those three ‘beers’ are synonymous with the USA to many people, but we’re here to tell you that there are SO many more worthwhile brews of all kinds that you should sample before resorting to the big-brand labels that are high on promotion but low on things that are important, like taste.

America has become a craft brewery boomscape over the past 10 years, and it’s practically impossible to go anywhere these days without being offered at least one locally-produced beer. That is especially true in Florida, which currently boasts more than 350 top-notch, independently-owned breweries – and counting.

The city of Tampa currently leads the way with 15 in the immediate city area, while there are almost 80 in total along that stretch of Gulf Coast from Dunedin down to Sarasota. Indeed, Dunedin could also be said to be the inception point for Florida’s craft beer bandwagon, with their namesake brewery having been founded way back in 1995.

But, if that is the Sunshine State’s epicenter of ale, you can’t go wrong in any region or any city. Craft breweries are simply big business and, whether it is their own taproom or the nearest brew-pub, you will have a tantalising array of choice as you go searching for a cold one.

Many breweries feature tours (with tastings!), while, with so many brews to try, you will often find flights of beer on offer, which means you can sample a wider variety without over-indulging.

So, with no further ado, let us tell you about our favourites, and point you in the direction of the big-city slickers as well as the small-town sophisticates.

It makes sense to start with the granddaddy of them all, one that has been an inspiration for at least another eight start-up businesses in the Dunedin city area since then. But there’s no mistaking this one, a family-owned and quality-conscious offering that typically features around a dozen ales and lagers, including their signature Apricot Peach Ale, Flashlight Lager and American Classic IPA. Also try: 7venth Sun Brewing.

Founded in Tampa in 2009, this is one of the city’s figurehead breweries that routinely turns out some of the most consistent and award-winning beers in the state, notably their Jai Alai India Pale Ale and the classic Maduro Brown Ale. All of them come with strong hints of Florida, such as citrus fruit and smoke (to honour the local cigar industry), and their taproom offers immersive, 40-minute tours every Wednesday to Sunday, from noon to 5.30pm. Also try: Tampa Bar Brewing Company. 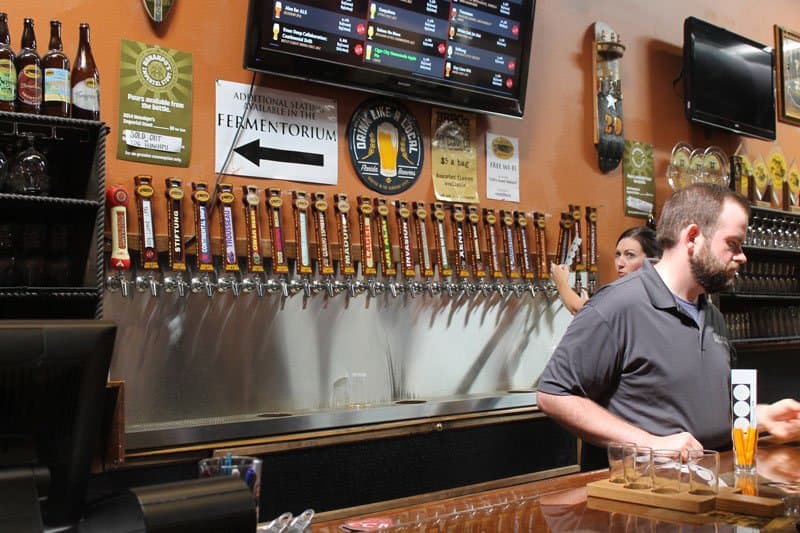 Arguably Tampa’s other big-name contender, Coppertail can be found in the historic Ybor City quarter, and its huge taproom and brewery also offers tours every Thursday to Sunday, including tastings and a souvenir beer glass. Fans of IPAs and coffee porters should check out their Free Dive and Night Swim respectively for a really deep, satisfying flavour, while there are usually around 20 beers on offer, and the food is pretty good, too. Also try: Angry Chair Brewing. 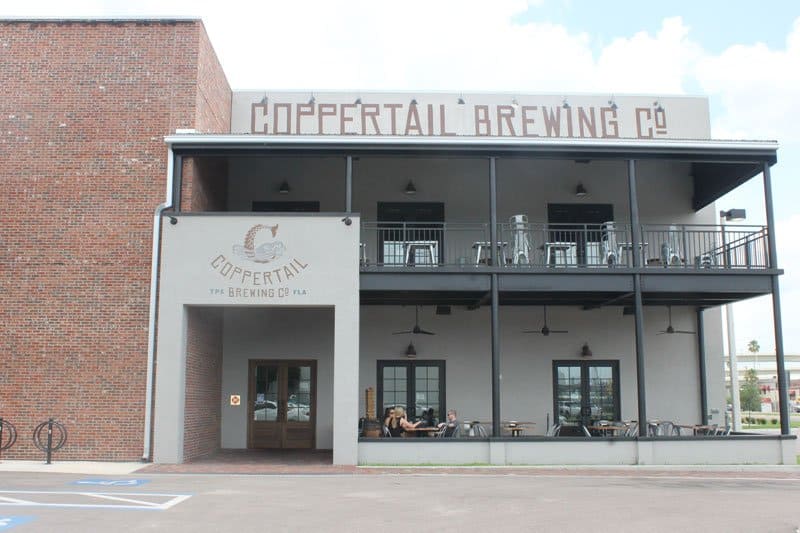 The city of Deland has a lot to recommend it (check out our blog all about it in our ‘Secret Florida’ series from last year), and one obvious contender here is this charming sidestreet set-up that invites visitors to ‘Drink sensibly but get weird.’ Their lively taproom usually features at least a delightful dozen in-house brews, including the hugely popular Dirty Blonde and Beach Hippie IPA, plus the current trend for hazy beers. Also try: Cocoa Beach Brewing Company. 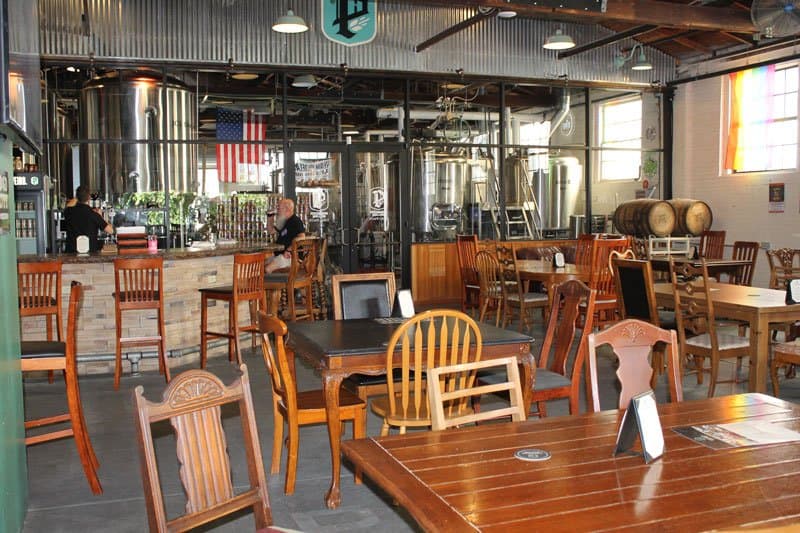 Head for New Smyrna’s happening downtown Canal Street area and you can’t fail to see the NSB Brewing Co in the centre of it all. This smart micro-brewery has already up-sized once in recent years, and its continued popularity with locals and visitors alike shows no sign of slowing down. Be sure to try the Coronado cream ale, Shark Attack IPA or Feeding Frenzy Irish red for a great sample of their wares. Even better – it is right next door to the wonderfully eclectic Yellow Dog Eats, and you can order food from there while you sup! Also try: Daytona Beach Brewing Co. 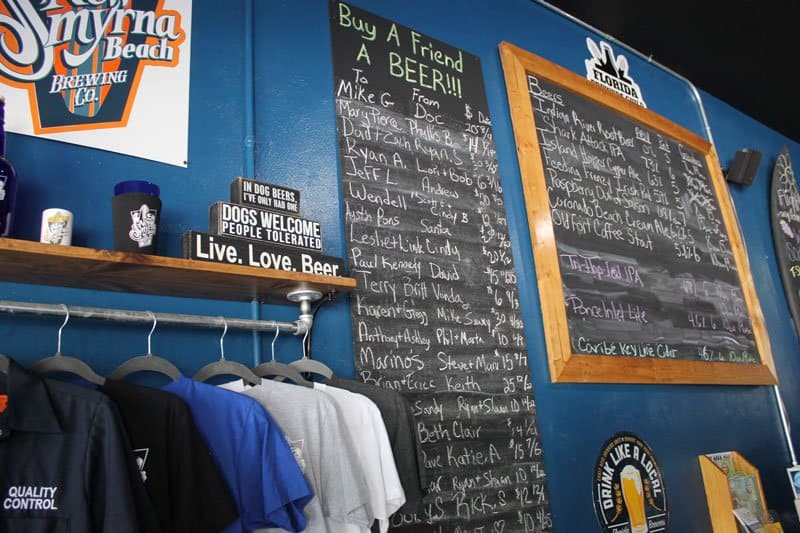 One of Jacksonville’s brightest brewing stars, Aardwolf is eye-catching both for its situation (in a converted railroad ice house) and its terrific array of brews, from sours to traditional IPAs and even barrel-aged specialities. The taproom is usually busy and highly convivial, and we can heartily recommend their powerful Master of Hops double IPA and smooth-as-silk Rye Whiskey Barrel Aged All-Star Special. Yum. Also try: Green Room Brewing. 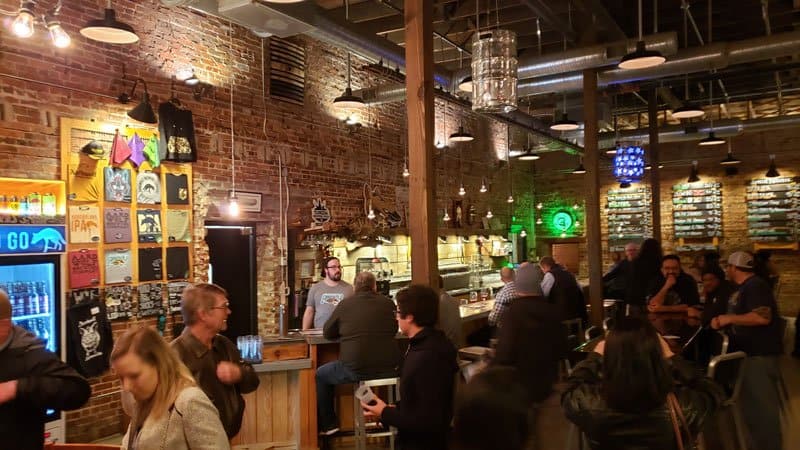 St Augustine is an obvious place to go for great craft beer, seeing as it has been around pretty much since the Spanish invented cerveza. And Ancient City is just as authentic, notably in two locations – their original Brewhouse on State Road 16 just outside the main downtown area, and a dedicated Taproom in the heart of the city. Augustine’s Orange Amber Ale is a great example of their wares, as is the Castillo Coconut Porter, and you’ll also find them in more than 200 restaurants and bars across northern Florida. Also try: A1A Ale Works.

Gainesville – home of the huge University of Florida – is another of the state’s big brewery centres, perhaps unsurprisingly. Swamp Head is their high-profile trail-blazer, a go-ahead company since its inception in 2008, turning out some truly world-class products with a real passion for what they do. There are tours on Tuesdays (6.30pm) and weekends (3, 4 and 5pm) and you will definitely want to try specialities such as their Wild Night honey cream ale, Midnight Oil oatmeal stout and seasonal Morning Glow, a vanilla coffee blonde. Also try: First Magnitude Brewing Company.

State capital Tallahassee is fast developing a fully deserved reputation for dynamic and adventurous beer production, and Proof Brewing is, ahem, proof of that. With a great tasting room, lovely beer garden, more than 20 brews on tap – including guest varieties – and intriguing flavours such as Citra hops, mango, vanilla beans and spices, this is the go-to place in the Panhandle for beer lovers. Also try: Oyster City Brewing Company, Apalachicola.

This organic micro-brewery was Orlando’s first back in 2001 and it has grown into a regional powerhouse, with an ever-changing variety that all adheres to the German Purity Law of 1516 that stipulates purely organic ingredients. With free tours from Monday to Saturday at 6pm, the brewery has a range of year-round favourites and seasonal and special-release additions that all add up to a fabulous array of tastes to suit all palates, from their signature Blonde Ale to a Pumpkin-Spiced Stout. Also try: Ten10 Brewing Company. 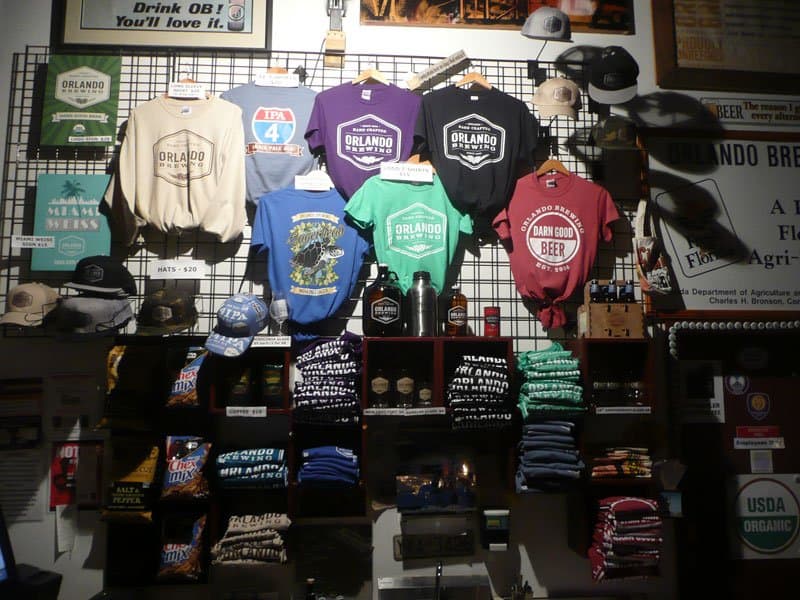 One of the newer entries to Orlando’s vibrant craft beer scene, Crooked Can benefits from both its location – inside the superb Plant Street Market, with all its food stalls, in the attractive suburb of Winter Garden – and a dazzling array of regular beers and specially-brewed batches. You are likely to find at least a dozen ultra-fresh selections at any one time, plus their seasonal releases, and you should definitely try their thirst-quenching Cloud Chaser hefeweizen, High Stepper IPA and (when available) Axum coffee stout. Also try: The Bear and Peacock Brewery, Winter Park. 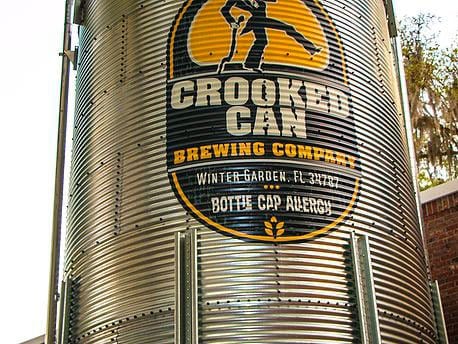 Currently the state-wide superstar of all Florida’s craft producers, Funky Buddha is one of the largest, founded in 2013 and quickly establishing itself as a Fort Lauderdale signature business. There are brewery tours daily (ideally booked in advance) and a huge taproom, regularly featuring more than 20 varieties and hosting different events most evenings, like their Taco Thursdays. The output is staggering, from their Core Beers like Floridian Hefeweizen to limited releases such as a delicious Maple Bacon Coffee Porter. This is the place for a kaleidoscopic taste sensation. Also try: Saltwater Brewery.

The city of St Petersburg is a great place to visit for a true sampling of the astounding variety of food and beverage options that now highlight the Sunshine State, and one of those is undoubtedly 3 Daughters. Uniquely named for the owners “needing to sell enough beer to put 3 daughters through college,” it has flourished with its own style and flavour profile, including their highly-acclaimed Brown Pelican – a dark German-style malt dunkelweizen – and Paul’s Landing orange wheat ale, and growing in recent years to include cider and seltzer. Also try: Cycle Brewing. 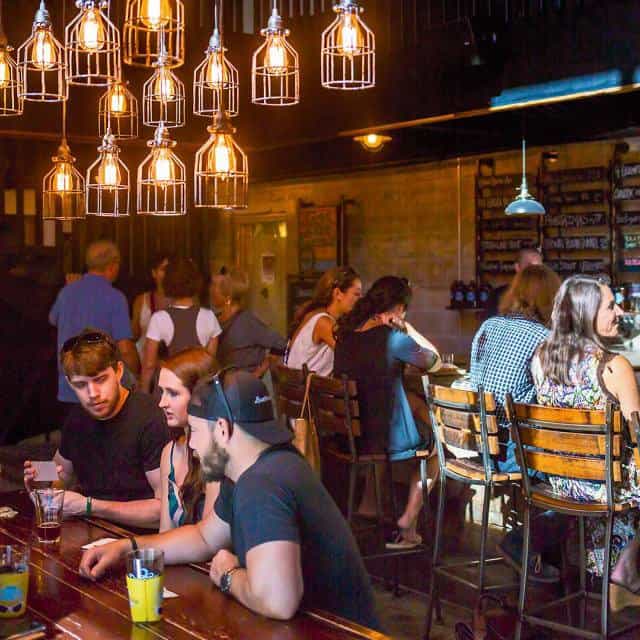 Funky and eclectic Tequesta, based on the Atlantic Coast in Jupiter, was the first micro-brewery in southern Florida to hold a silver medal title from the Great American Beer Festival. An Organically Certified Brewer, it features more than 40 different beers a year, ranging from the light and smooth to sharp and hoppy. Their most popular brew is Der Chancellor German kolsch, but we especially like Don’t Doubt The Stout and Let That Mango wheat ale. Also try: Civil Society Brewing.

Boynton Beach is a relative backwater on Florida’s Gold Coast, but there’s nothing low-key and retiring about Due South. With a large taproom and indoor beer garden – imaginatively also serving craft sodas and wine – and regular events like craft fairs and paint nights, this is a real community gathering place with a great evening vibe (closed Mondays). There are four year-round brews on tap, notably their luscious Caramel Cream Ale, plus seasonal special releases. Also try: Barrel of Monks Brewing, Boca Raton.

It’s probably surprising not to see Miami on the list of Florida’s best craft brewery offerings until now, but Wynwood Brewing definitely put them on the map in 2013 with a mission to be innovative and locally influenced. They have kept at it ever since, producing core beers and special editions that all draw heavily from the neighbourhood’s artsy vibe in offerings like the refreshing La Rubia Blonde and Pop’s Porter, which is beer’s answer to iced coffee. Also try: J Wakefield Brewing, M.I.A. Brewing. 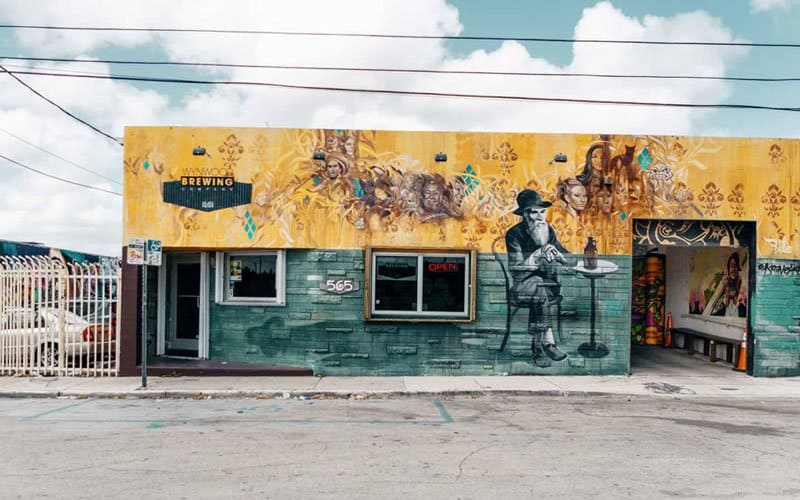 As a final entry in Florida’s catalogue of brewing brilliance, the Orlando region – from the downtown area to as far as DeLand 42 miles to the north – has banded together its leading 28 breweries under one imaginative brand, with a listing and details of how to find each one.  Look it up at http://centralfloridaaletrail.com/.

If those are our current faves, there are absolutely dozens of others that are well worth trying, so feel free to travel, taste and experiment. Happy drinking…!

All in all, we think this is a genuinely surprising destination that has charm aplenty – and great food in abundance!