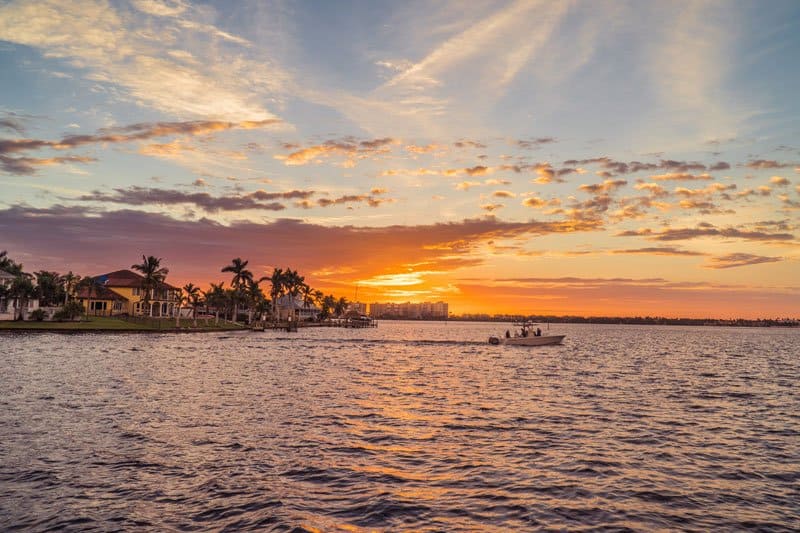 There are various names that trip off the tongue lightly and immediately whenever you mention Florida. Cities like Miami, Orlando, Tampa, St Augustine, Daytona Beach; they all readily spring to mind as obvious Sunshine State destinations.

But how about Cape Coral? It’s actually the 10th largest city in the state – bigger than Gainesville, Boca Raton and West Palm Beach, which all have more immediate name recognition – it is at the heart of some of the best (and least crowded) beaches, and it has more than 400 miles of canals; more, in fact, than either Venice or Amsterdam.

It also boasts one of the biggest Oktoberfest celebrations in Florida, and it is home to the largest population of burrowing owls in the state!

In fact, even by Florida’s impressive standards, Cape Coral is often listed as one of the most desirable places to live in the south-east, with a superb winter climate (around 24C from December to February) and a highly boat-centric culture that stems from all those canals.

We rate it as one of the state’s biggest undiscovered gems in tourist terms as most people rush past from Tampa to visit the more ritzy city of Naples to the south or head out onto the chic barrier islands of Captiva and Sanibel.

Where is Cape Coral?

But those who take the time to slow down and sample this unique location on the Caloosahatchee River, which separates Cape Coral from its near-neighbour of Fort Myers, are rewarded with a highly enticing location, with plenty of outdoor activities, a thriving cultural scene and some distinctly smart elements of its own.

It is 136 miles south of Tampa and 158 north-west of Miami. Naples is a 50-minute drive away, and that blissful, laid-back duo Sanibel and Captiva are even closer over the nearby Sanibel Causeway.

More importantly, it is easy to find off west coast highway I-75, but it is nicely insulated from too much large-scale growth and development by its highly eco-friendly surroundings, which include the Caloosahatchee River, Pine Island, Matlacha Pass Aquatic Preserve and Yucca Pens, a state wildlife management area that is popular for fishing, bird-watching and hiking.

There is probably more wildlife – both land and water-based – here than many more well-known areas for Florida’s birds and animals.

And, with all those canals and waterways, you can usually get a water taxi to just about anywhere you need to go, including Captiva, Sanibel and Fort Myers Beach.

What is there to do in Cape Coral?

You’ve probably already got the sense that this is a highly outdoorsy place; that water-borne pursuits are all the rage; and that you should bring a good pair of binoculars with you for all the wildlife.

Golf is high on the agenda for many, with almost a dozen first-class courses, while there are plenty of opportunities for both inshore and deep-sea fishing. Eco-tours, kayaking and paddle-boarding through the fascinating mangroves are other widespread activities, and you will never be short of choice.

Of course, this is coastal Florida, so blissful beaches are never far away. Cape Coral itself has a good stretch of public beach at Yacht Club Community Park as well as the smaller Four Freedoms Park, and the Caloosahatchee riverfront makes for some scenic sight-seeing.

Also here is the Randell Research Center, with its Calusa Heritage Trail, which is dedicated to the archaeology, history and ecology of south-west Florida, with the full story of the native peoples of this area.

What are the top attractions of Cape Coral?

In addition to the many outdoor and eco-friendly activities, this is also the place to come for a variety of man-made fun, too, starting with Sun Splash Family Waterpark, with more than 14 acres of slides, flumes and high-energy attractions to appeal to all the family.

On a different note, military history fans will want to make a beeline to the Southwest Florida Military Museum, which celebrated its 50th anniversary this year. It highlights US war-time history from 1776 to the present day and includes a terrific array of artefacts and memorabilia, including highly detailed sections on WWII and the Vietnam War.

When you’re ready to enjoy the watery side of Cape Coral, head to Tarpon Point Marina, where the fishing charters go out year-round and game-fishing for the likes of grouper and tarpon is big business. You can also hire boats, kayaks and paddle-boards, take a sunset tour or head out onto the Intracoastal Waterway on a dolphin-watch cruise.

Where are the best places to shop in Cape Coral?

There are very few places in Florida that don’t reward the keen shopper, and Cape Coral isn’t one of them, albeit the retail therapy style here is more low-key and small scale than some of its big-city brethren, notably with some elegant one-off stores and galleries.

The downtown centre is based along Cape Coral Parkway East, from Bimini Basin (and Four Freedoms Beach) to Cape Coral Marina, and includes the unique art and gifts of Karma & Coconuts and homespun Blue Moon Antiques as well as an attractive array of dining choices.

More individual style can be found at Zotters Chocolates, Beaded Envisions and Sunken Treasures, while the Safe Harbor Cape Harbour marina – neatly tucked in to the gorgeous waterfront – features more elegant boutique shopping to go with its smart restaurants.

You can also check out the weekly Farmers Market each Saturday, which offers dozens of kiosks, from fresh produce to jewellery, at Club Square.

For the large mall experience, head across the river to Fort Myers and check out the Edison Mall, with more than 160 shops, including department stores Dillard’s and Macy’s, plus a food court and several restaurants.

What are the best restaurants in Cape Coral?

There are more than 300 restaurants and cafes in the city area, and many of them boast wonderful water views, either over the Caloosahatchee River, Matlacha Pass or the many canals hereabouts.

Excellent fresh seafood is always prominent on the menu, along with an array of impressive Italian restaurants and several outstanding pizza places. Chinese and Indian cuisines also make an appearance, along with some tempting Mexican options such as Iguana Mia, Monarca’s and Mexico Lindo.

But you really want lunch or dinner with view, don’t you? In that case make sure any of Rum Runners (surf and turf specialities), Cape Harbour Oyster Bar and Grill (with notable outdoor dining), Redfish Point Garden Bar and Grill (classic American fare), Boat House Tiki Bar and Grill (don’t miss their Coconut Shrimp and Mahi Mahi tacos), Cactus Jack’s (great Tex-Mex) and Olde Fish House Marina (from their docks to your table!) are on your list.

On Pine Island, you won’t go wrong at the Waterfront Restaurant and Marina, Woody’s Waterside Island Rum & Grill, Yucatan Waterfront Bar & Grill or eclectic Capt’n Con’s Fish House, with its sunset views, while, for a memorable breakfast, each of Annie’s, House of Omelets and Hart & Soul Café come highly recommended.

Where should we stay in Cape Coral?

In keeping with Cape Coral’s more low-key, small-scale style, this is a good place to look for a private-pool villa set among the many eye-catching waterways and canals that are a distinctive part of the city-scape.

But, for a resort that ticks all the boxes, there is really only one standout choice, and that is the Westin Cape Coral Resort at Marina Village. This distinctive 18-storey tower sits right on the Caloosahatchee and has its own inclusive water taxi service to Fort Myers Beach as well as being adjacent to Tarpon Point Marina for a range of fishing charters and kayak rentals.

The hotel itself has a wonderful range of services and activities, including the Esterra Spa & Salon, state of the art fitness studio, extensive resort pool and grotto, tennis courts and bicycle rentals. For dining, Marker 92 Waterfront Bar & Bistro offers superb river views as well as outstanding cuisine throughout the day (and their Florida Spiced Mojito is a must-try cocktail).

Accommodations range from standard rooms to one, two and three-bed suites with full kitchens, while there is even a nature trail and its own shopping promenade, making for a complete resort experience. Very much like Cape Coral itself!