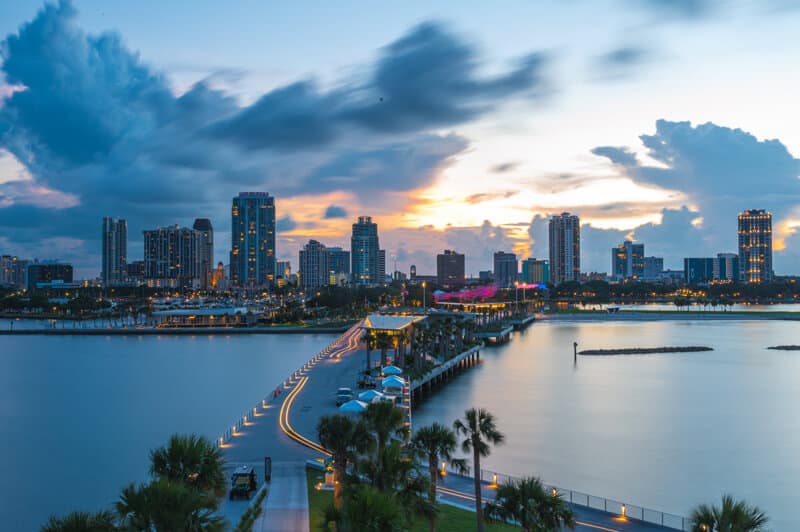 As if we needed one more reason to visit the lovely St Pete-Clearwater area of Florida’s Gulf Coast, here comes a full 26-acre, $92million attraction from the city of St Petersburg.

St Pete and the nearby beaches have long been a major draw for UK visitors, but this latest addition to a highly vibrant city scene is sure to add even more appeal, not least because of the huge investment in this case – and the controversial story behind its rebuild.

Anyone who has been to St Petersburg in the past will have noticed the distinctive upside-down pyramid of the old Pier, a unique structure built in the early 1970s and very much an iconic part of the downtown waterfront area.

The 2000s had not been kind to the city’s eye-catching monument, though. Maintenance costs were soaring and the upkeep of the main five-storey building, with its shops, restaurants, mini-golf and aquarium, were such that its collapse was forecast by 2014 unless a complete rebuild was undertaken.

So far, so good. Everyone was in agreement, and an international architectural competition was held to find a suitable replacement. In January 2012 a Los Angeles company was unanimously confirmed as the winning design, and ‘The Lens’ was paraded as St Petersburg’s forthcoming new bayfront icon.

The famous Pier was shut down in May 2013 in advance of its demolition, but then things started to go badly off course. Fans of the old ‘pyramid’ raised doubts about the replacement’s viability and profile, and the issue became the city’s hot-button topic.

The renovation project was immediately put on hold and a citizen-led referendum was held that overwhelmingly rejected the 2012 ‘winner.’ It was back to the drawing board, with every element of the pier’s future put under scrutiny.

Debates raged on a regular basis as proposals were submitted and rejected for the next two years until a final hearing in April 2015 approved three all-new designs and put them to a city council vote. The winner: Pier Park, a collaboration between New York and Tampa Bay architects.

Demolition finally began in August 2015 and what had become something of an embarrassing eyesore started to assume a completely different aspect and proportion. The artist renderings of the new look were all highly encouraging and construction moved ahead quickly.

Fast forward to July 2020 – to the relief of all concerned – and St Petersburg’s new destination-style Pier is now open, to huge critical and public acclaim.

In the early construction stage, the design was significantly enlarged to include a full 26-acre pier ‘district,’ providing a living link between the main downtown area and the pier itself, hence the Pier Park name.

And this is the ultimate triumph of the architect’s design, a seamless transition from street to park to pier, with a series of areas that provide for shopping, relaxing, dining and play.

The new, multi-purpose facility leads visitors through The Gateway off 2nd Avenue into a series of inter-connected elements that highlight different facets of Florida coastal life:

The Marketplace – right up front, this is a collection of 17 local vendors (currently) that range from hand-made jewellery to Caribbean sauces and give the Pier a bustling, lively vibe, especially at weekends. It is also under a unique steel canopy ‘roof’ of photo-voltaic cells that collect solar power and supply electricity to the vendors as well as the lighting along the covered walkway.

Spa Beach & Park – here’s another novelty, a man-made downtown beach that provides an inviting open area of seats and tables that urges visitors to kick back and enjoy the magnificent bay views, play beach volleyball or just get sand between their toes.

Pier Plaza – the entrance to the pier proper, this adds a stylish roofed structure and café, with more colourful tables and seats. For children, there is an interactive water feature with a splash pad and pop-jet fountains that ensure a chance to have fun and cool down at the same time.

Coastal Thicket – here’s another novelty, an opportunity stroll through an oasis of native Florida plants, trees and shrubs. Vegetation includes large trees like the myrtle oak and white buttonwood, as well as sabal palms, palmettos, sea oats and native grasses. The shady boardwalk runs all the way to the final marker of Pier Point and is illuminated for evening walks.

Extensive open-air artworks are another key feature of Pier Park, and they run the gamut from small, red pelicans – the symbols of the Park – to a massive 430ft-long net structure that moves with the wind.

Large-scale pieces include the historical Benoist Exhibit, which commemorates St Petersburg as the birthplace of commercial aviation with a life-size sculpture of the Benoist seaplane, and a sizable mosaic by artist Xenobia Bailey of Seattle.

Tampa Bay’s own highly acclaimed sculptor Janet Echelman took charge of what is likely to be the piece of art most seen on Instagram in future. The ‘Bending Arc’ net sculpture is 430ft by 70ft and required a mind-boggling 180 miles of twine to create, and it takes on a whole new dimension at night, a glowing beacon of magenta and violet light waving in the breezes above the park.

This is definitely the place to come for a memorable meal or two, with no fewer than six restaurants and cafes to choose from, ranging from a casual drink or ice cream to a full-scale romantic experience at the fourth floor restaurant in the main building at the end of the pier.

Take your pick from authentic Florida flavors at Doc Ford’s Rum Bar & Grille – the popular Sanibel and Captiva restaurant, with its signature Mojitos, transplanted to St Petersburg – or the casual fare of waterfront bistro Fresco’s, with its outdoor deck. Spa Beach Bistro offers a grab-and-go selection of lighter fare and pizzas next to Spa Beach and the children’s splash pad.

Just want to kick back with a drink or two? Head for the classic tiki bar vibe of Polynesian-inspired rooftop Pier Teaki, or just enjoy the outdoor style of Driftwood Café, next to the signature grassy oasis of Tilted Lawn, where fancy coffees, ice cream, sandwiches and pastries are the order of the day.

Finally, for that special meal, Teak is the upscale dining venue, with sumptuous views over the bay as well as the city. Dishes include teak-spiced fish spread with plantain chips, citrus-tinged mahi tacos, roasted Florida yardbird (otherwise known as chicken) with jezebel sauce, and a pan-roasted grouper with citrus herb risotto and a mandarin citrus sauce.

What The Architects Say

As impressed as we are by this massive investment, you don’t have to take just our word for it. The Tampa Bay Times canvassed a number of leading local architects about St Petersburg’s fancy new icon, and the reaction was almost overwhelmingly positive.

Dawn Gunter, principal and co-managing director of the Tampa office for Gensler:

“Picnic blankets, dogs resting, families with strollers, skateboarders, roller-bladers, wheelchairs, fishing and squeals of joy at the splash pad create an inspiring sense of possibility for the art and architecture at the Pier. Great urban design is also on display. The Pier has been re-imagined to be multiple ‘spaces in between’ where everyone can find their favorite destination.”

“As a destination, the Pier offers locals and visitors a uniquely St Pete experience beyond downtown and the beaches. I like that the new plan gives visitors a variety of choices of how to spend their time. One can have a quiet walk, browse or shop in the market, have a snack or an elegant meal, or a drink with friends. It’s also a great spot to watch sailing and boating, as well as planes take off and land at the airport.”

Where To Stay in St Petersburg

The city is very much a major destination in its own right these days, packed with exciting museums, restaurants and shopping. There are also two classic hotels that should be high on your list for a stay in this area.

Vinoy Renaissance Resort: Right in the heart of downtown St Petersburg, and only a short stroll from Pier Park, the Vinoy is a 1920s gem that still offers classic period style, but with all mod cons, plus the extra benefit of its own golf club.

The Don CeSar: Just a few miles away on St Pete Beach, the ‘Pink Palace’ of The Don is an absolute beachfront icon in its own right, superbly positioned for seaside fun in five-star style, packed with amenities and facilities, including memorable dining.

So there you have it, a hugely positive reaction to a major new part of the Gulf Coast scene. Now the only question is: how soon can you get here?