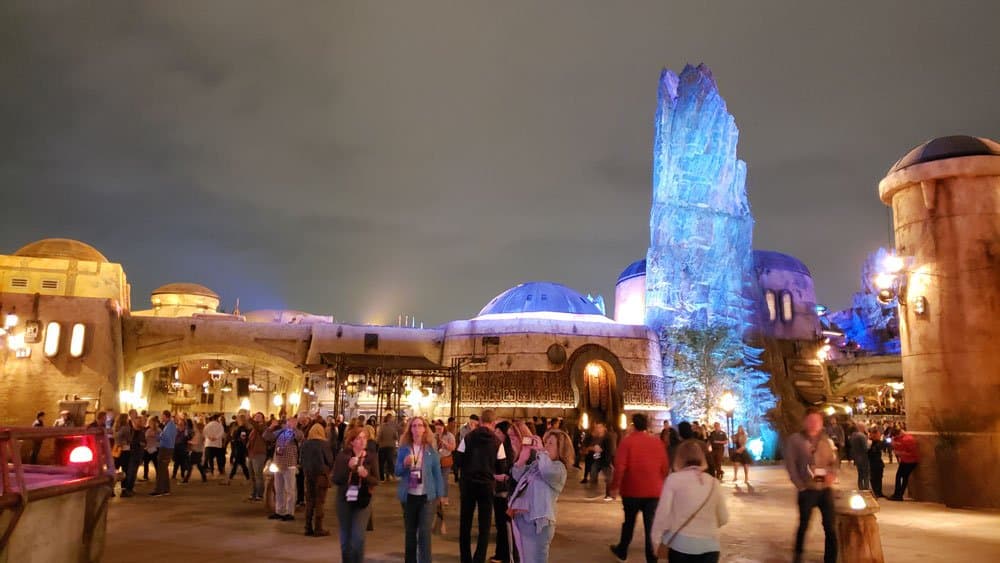 Star Wars fans have been waiting for it for decades; Disney fans have been on tenterhooks about it for the past five years; and now everyone can enjoy a trip to ‘a Galaxy far, far away’ for the first time at the Walt Disney World resort in Orlando.

Yes, Florida’s big theme park news this month is all about the new Star Wars: Galaxy’s Edge area in Disney’s Hollywood Studios in the House of Mouse, a $1billion investment in the most immersive, all-encompassing and downright astounding development in the Disney empire.

Like the version that opened in Disneyland in Anaheim earlier this summer, Orlando’s own Galaxy’s Edge is an epic 14-acre cinematic experience built completely from the Star Wars catalogue of out-of-this-world design and iconic experiences, taking visitors to the planet of Batuu and putting them in the heart of the mysterious Black Spire Outpost.

Even non theme-park fans will be beating a path to Disney’s door for a taste of Oga’s Cantina (inspired by the Cantina in the original film Star Wars: A New Hope), Docking Bay 7, with its “food from around the galaxy,” and Ronto Roasters, where the fresh-roasted Ronto meats looks suspiciously like sausage!

There is also the chance to sample Blue or Green Milk, just like in A New Hope and Attack of the Clones, while visitors can also build their own R2 or BB unit at the unique Droid Depot, which builds on other elements of the classic films. For even more realism, you can even assemble a customised lightsaber at Savi’s Workshop, where the myth and mysticism of The Force is most definitely at work.

There are shops, too, as you would expect to find in the Marketplace of an alien planet. Toydarian Toymaker has hand-made toys based on Star Wars legends, while all your Jedi costuming can be done at Black Spire Outfitters. Then Bina’s Creature Stall offers a crazy array of other-wordly animals – including Porgs and Kowakian monkey-lizards – and Jewels of Bith features accessories and trinkets from across the Outer Rim.

Need more? Dok-Ondar’s Den of Antiquities has masses of eye appeal, with a selection of big-name lightsabers among lots of movie memorabilia, plus the looming presence of Dok himself, the Ithorian collector who is ready to sell anything – if the price is right.

And then there are the two big attractions of Galaxy’s Edge, starting with the most iconic of all – the Millennium Falcon. Here, guests have the chance to walk aboard the most famous spaceship in the universe, and fly her on a special mission for arch trader Hondo Ohnaka. Millennium Falcon: Smugglers Run is simply an all-out, all-action romp through classic Star Wars action, with the chance to be a Pilot, Engineer or Gunner in the Falcon’s cockpit, battling the forces of the First Order to pull off a daring mission for The Resistance.

It is an absolute classic of its kind, with some of the most Instagramable moments you could possibly wish for, including the chance to sit at the Holo-chess table made famous by C-3PO and Chewbacca in A New Hope, while you await your turn at the spaceship’s controls.

As good as that sounds, however (and it should sound, very, VERY good indeed!), there is more to come from Galaxy’s Edge from December 5, when the second big attraction, Star Wars: Rise of the Resistance opens.

If you think all the previous theming and immersive nature of this ‘land’ is astounding, Rise of the Resistance will up the ante still further, taking you on a journey of movie thrills and excitement like nothing before. This experience – going aboard a Star Destroyer and interacting with Stormtroopers, droids and heroes of the Resistance – will convince you the Star Wars world is truly real, and you have played your very own part in it.

And that, ultimately, is what Galaxy’s Edge is all about. Disney has spent a galactic fortune on creating a genuine film environment that gives visitors the chance to create their own story of heroes and villains, action and adventure. It’s all waiting for you at Disney’s Hollywood Studios – and may The Force be with you!